This project is the exploration how moss could be used as a source of renewable energy. Mentioned emerging technology is called biophotovoltaics (BPV) which uses the natural process of photosynthesis to generate electrical energy. Photosynthesis is a process by which plants and algae convert carbon dioxide from the atmosphere into organic compounds using energy from sunlight. The plants use these organic compounds (like carbohydrates, proteins and lipids) to grow. When the moss photosynthesizes it releases some of these organic compounds into the soil, which contains bacteria. The bacteria break down these organic compounds, which they need to survive, liberating by-products that include electrons. By providing an electrode for the micro-organisms to donate their electrons to, the electrons can be harvested as electricity. These electrons are captured by conductive materials inside the prototype. 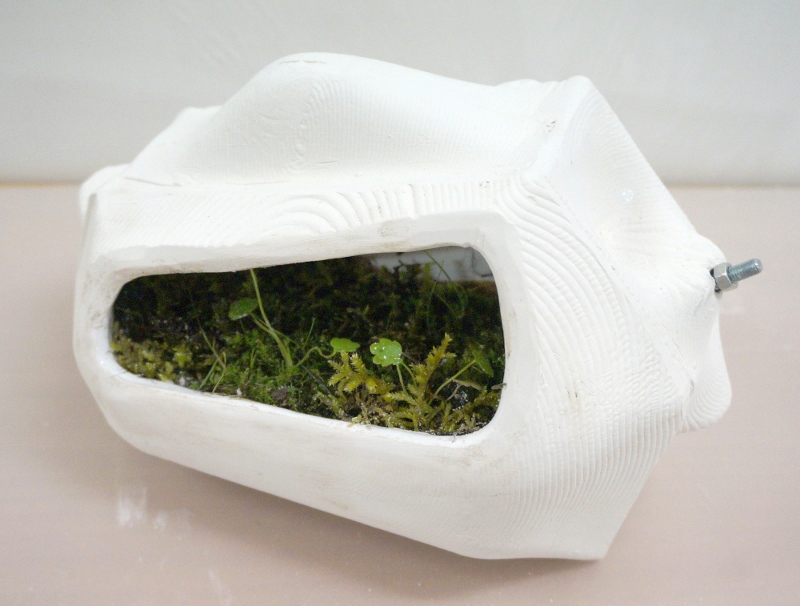 Properties of the plant. Mosses are small flowerless plants that chiefly grow in areas of dampness and shade, such as wooded areas and at the edges of stream. The individual plants are usually composed of simple, one-cell thick leaves, covering a thin stem that supports them but does not conduct water and nutrients. Mosses are very robust: they can grow anywhere in cool damp cloudy climates, and some species are adapted to sunny, seasonally dry areas like alpine rocks or stabilized sand dunes. Mosses require high levels of moisture to survive because of the lack of a vascular system, and the need for liquid water to complete fertilization. Many mosses can survive desiccation, sometimes for months, returning to life within a few hours of re-hydration. 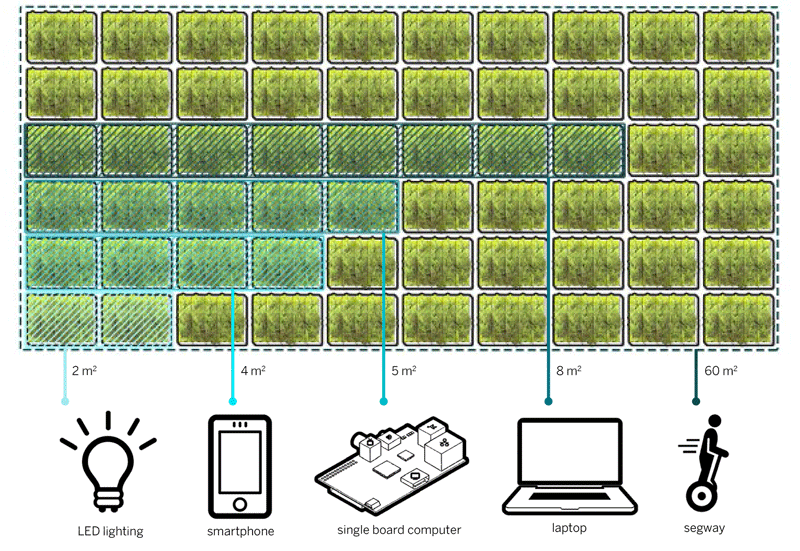 Urban application: As mosses are also found in cracks between paving stones in damp city streets, and on roofs there is a possibility to spread the system into the urban environment. Some species adapted to disturbed, sunny areas are well adapted to urban conditions and are commonly found in cities. Mosses are sometimes used in green roofs. Advantages of mosses over higher plants in green roofs include reduced weight loads, increased water absorption, no fertilizer requirements, and high drought tolerance. Since mosses do not have true roots, they require less planting medium than higher plants with extensive root systems. With proper species selection for the local climate, mosses in green roofs require no irrigation once established and are low maintenance. Compared with silicon-based photovoltaic cells, a solar cell that uses biological material to capture light energy would be cheaper to produce, self-repairing, self-replicating, biodegradable and much more sustainable. The manufacturing process is harmless to the environment.Furthermore BPV panels can exist in the places where solar panels are not efficient – northern countries with the lack of direct sunlight. 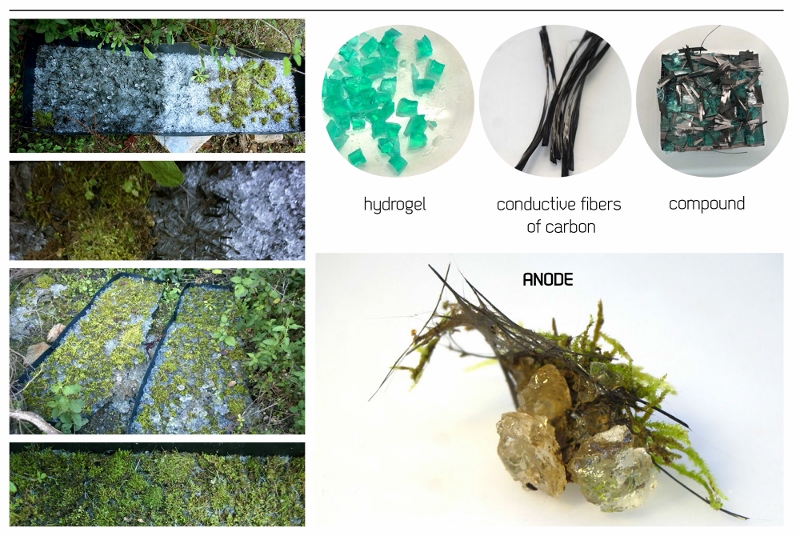 Biophotovoltaic cell represents an organization of units combined in series or parallel circuits. Unit is a full operating bio-electrical system. It consists of the anodic biological material (moss), the anode,  the cathode, the “salt bridge” that permit to the positive charge (generally protons) to travel from the anodic biological material to the cathode. The anode represents the mixture of hydrogel and carbon fibers that help to attract the electrons. Hydrogel is a polymer that can absorb water up to 400 times to its weight, it keeps complementary humidity for the moss and it is pH neutral. The materials are not damaging any metabolism. Thus first tests to check how fibers coexist with moss and polyacrylate were made. One unit 100×100 mm: for the anode were mixed carbon fibers and hydrogel in cubes (sliced for thinner small sheets) + a layer of carbon fabric, the mixture was covered with moss. The cell showed 0,35 volts. Meanwhile “moss plantation” was set up in Valdaura wherefrom anode would be taken for embedding it to the structure. For this fibers with polyacrylate were mixed and moss was placed atop and pressed down + moss was divided in small pieces and distributed over the same mixture.  After 1 months moss grew through the mixture.

Design of a system. Bricks represent sort of a container that can create special microclimate that helps to keep moss alive. The bottom part inside that brick is glazed to be waterproof, the rest is a porous clay without a coating. This clay absorbs water, so the system could be passive receiving water from rain, where hydrogel retains liquid for a long period. 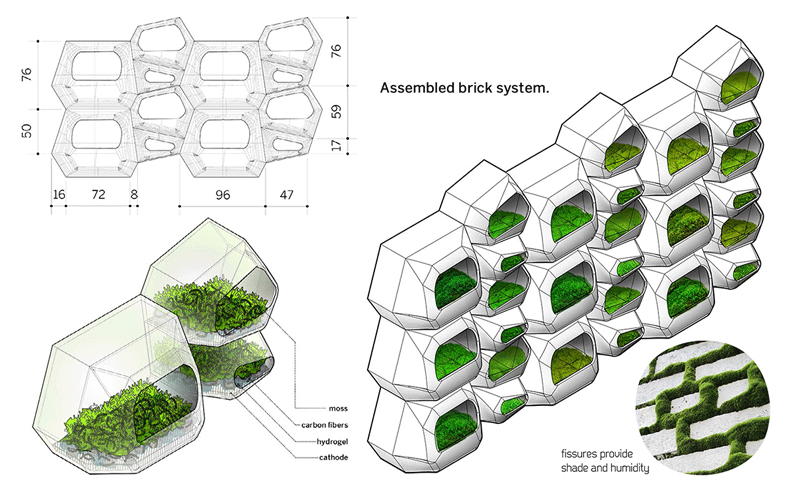 The first elements were made to see if the method of slip clay casting works. Slipcasting is a technique for the mass-production of pottery and ceramics. A liquid clay body slip is poured into plaster moulds and allowed to form a layer, the cast, on the inside cavity of the mould. For a hollow cast mould, once the plaster has absorbed most of the liquid from the outside layer of clay the remaining slip is poured off for later use. Generally there are few steps in making a plaster mold: a) forming a shape made of clay; b) formwork around the matter + several divisions for pieces of the mold; c)pouring liquid plaster. In this project those items have been overstepped, the plaster mold was done with the milling CNC machine. So the shape was created digitally that means accuracy and precision. 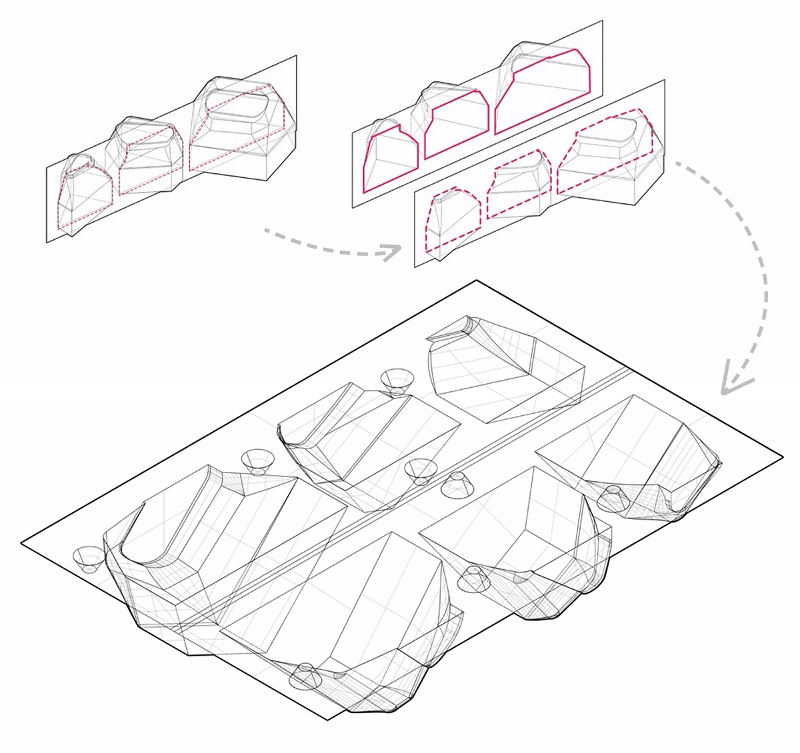 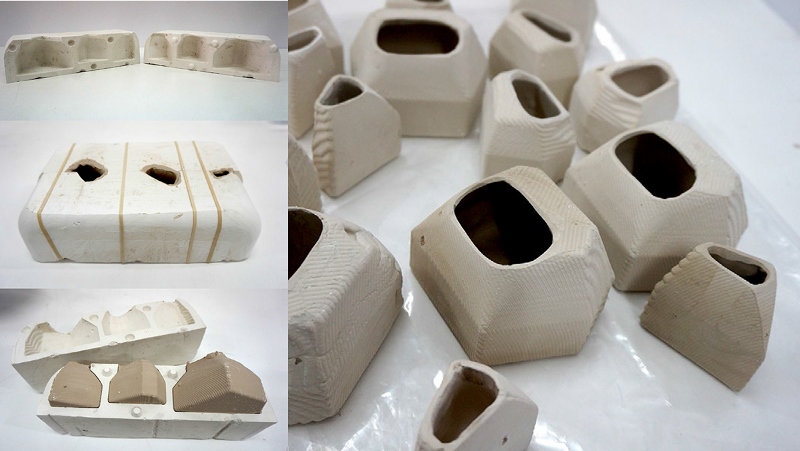 Receiving data. There was made a device that can read Lux, Humidity, Temperature and Volts every 5 seconds with sensors and save it directly to .csv file. Here is a graph with 4 days, where you can see the relation of voltage and humidity. 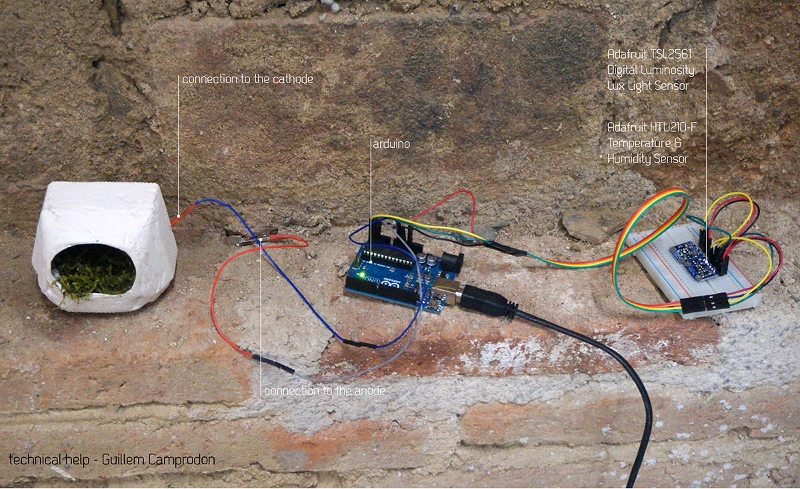 The initial idea is to go for the facade, so the scale of the first prototype was quiet small considering it as a ventilated facade brick. As far as the customization technic and the electrical components are functioning the shape transfers to a new design. It is predicted by the system of assembling, by the forces that are distributed through the whole volume, and by the specific conditions linked with the fabrication process (the size of bits for milling, the quantity of pieces for the mold, the way clay is casted). Elements are gathered by the relief on their side faces without adding any cement mixture. Electrical connections are passing through those system joints. Moss is not exposed to the direct sunlight, blocks provide the required shading. 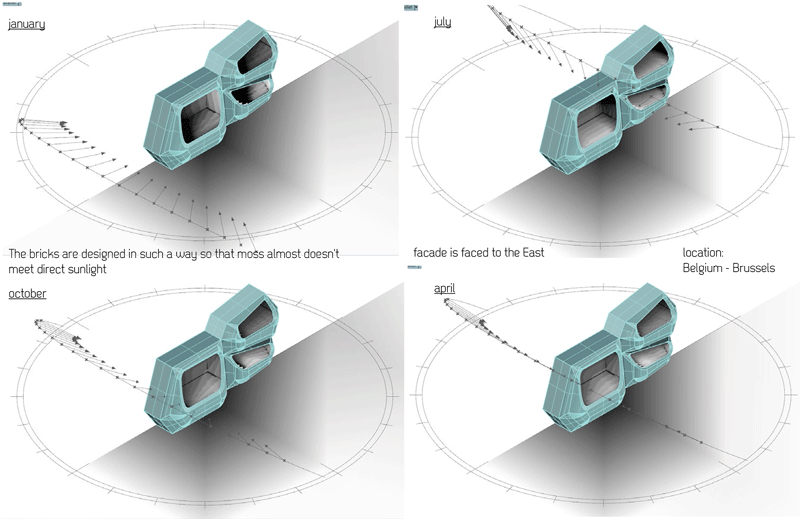 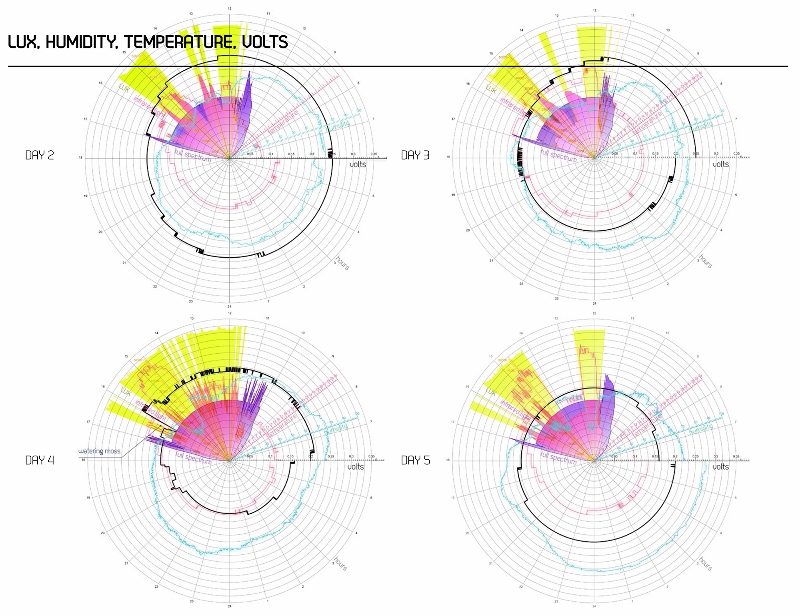 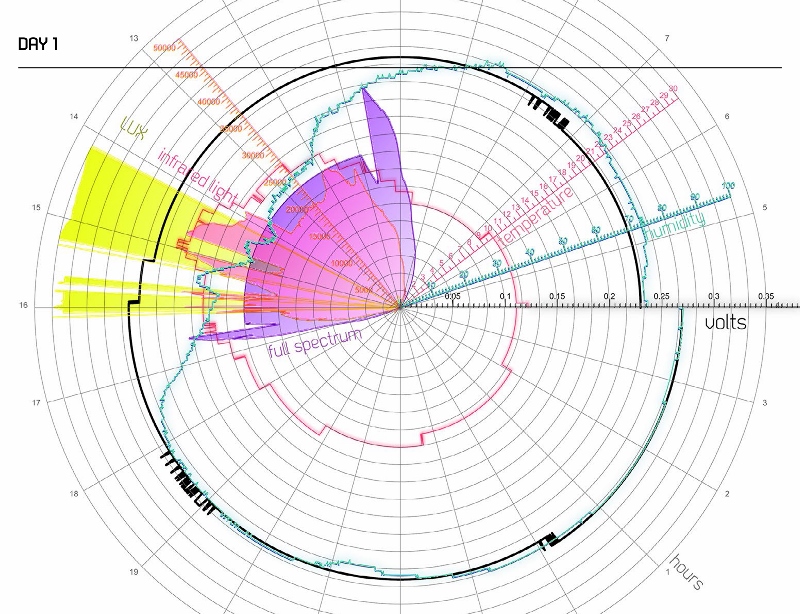 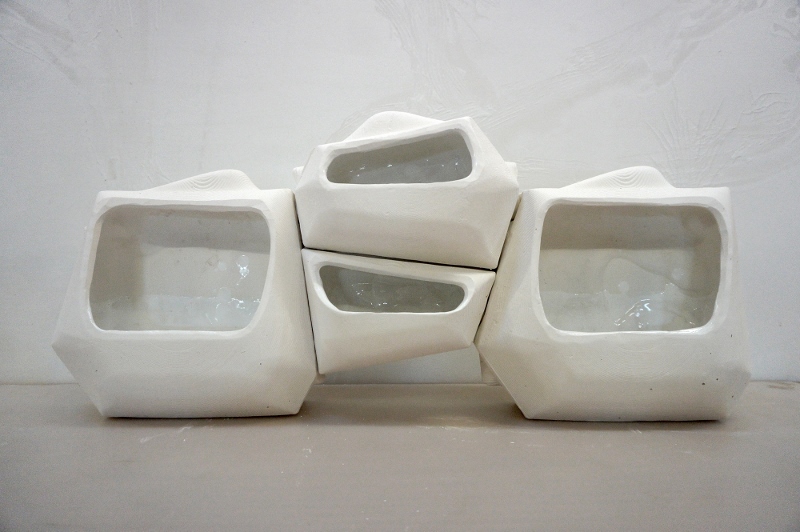 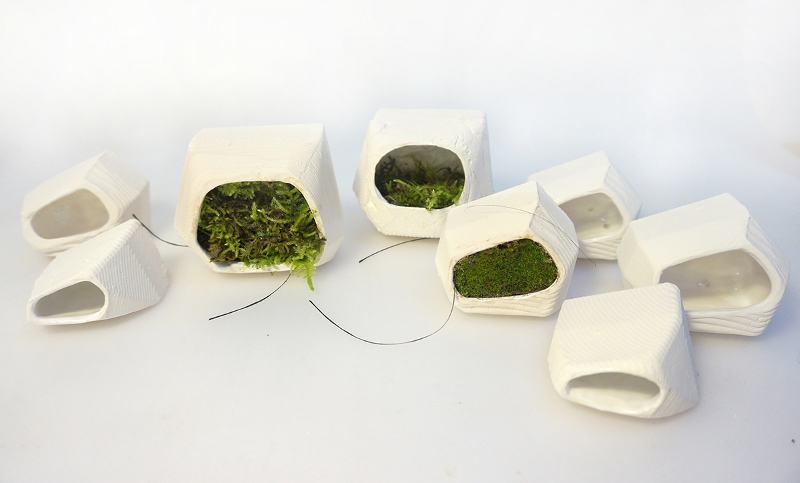 the project is done by